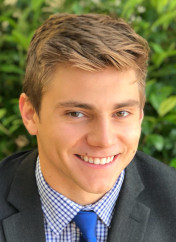 Brooks is the son of Donna and Terry Douglass. He grew up in Grand Island, Nebraska where he was actively involved in National Honor Society and athletics during high school. In college Brooks has excelled in both inside an outside of the classroom. Brooks is a member of the College of Business Honors Academy at UNL as well as a volunteer at the after school program Lighthouse for at-risk youth. Brooks is a dedicated individual who values the relationships that he builds with those around him. He has shined as a leader within the Alpha Tau chapter and looks forward to leading the recruitment process this summer.

Jack is the son of Marty and Tanya Patzner. He grew up in LaVista, Nebraska where he was heavily involved in DECA and athletics. As an undergraduate, he’s majoring in Nutrition and Health Sciences with a minor in Business. Outside of the classroom, Jack volunteers at the after-school program Lighthouse for at-risk youth, as well as staying very active within the chapter. Jack served as an Assistant Social Chairman and is currently an Assistant Recruitment Chairman for the Alpha Tau chapter. 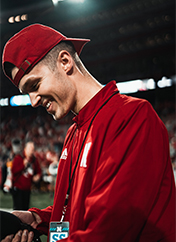 Sam is the son of Richard and Mary Beth Rice, and is from Lincoln, Nebraska. He is majoring in Emerging Media Arts with an emphasis in Sonic Arts and Cinematic Arts, and he currently has a 4.0 GPA. In college, he is a part of the UNL Honors Program and The Office of Academic Success and Intercultural Services (OASIS), and he also serves as a student ambassador for the Hixson-Lied College of Fine and Performing Arts. In Beta he currently serves as our Public Relations Chairman and an Assistant Recruitment Chairman for the Alpha Tau Chapter.